Ralf Rangnick admitted Manchester United’s hopes of Champions League football next season are over after Arsenal took control of the battle for a top-four finish in the Premier League with a 3-1 win at the Emirates.

Sixth-placed United are six points adrift of the top four and could miss out on European football completely for only the second time since 1990.

Cristiano Ronaldo scored his 22nd goal of the season on his return to the United side after missing Tuesday’s 4-0 thrashing at Liverpool due to the death of his newborn son.

However, Ronaldo will regret letting Bruno Fernandes take a second-half penalty with the game finely poised at 2-1 to the Gunners.

“For me even before that game it was not very likely, but after today’s result the top four is gone,” said United interim boss Rangnick.

The German described his side’s display at Anfield as “humiliating” and “embarrassing”.

United reacted to that defeat by formalising the appointment of Ajax boss Erik ten Hag as the man to take charge at Old Trafford from next season.

However, the Dutchman will not have been impressed by another shambolic start from the side he will inherit.

It took just two minutes for the visitors’ defence to be breached as David de Gea’s fine save from Saka’s initial effort counted for nothing as Tavares swept home the rebound.

There was another show of support for Ronaldo as just as at Anfield in midweek the entire stadium applauded during the seventh minute.

On the field, the Portuguese was receiving little help from his teammates.

De Gea stood up well to parry a piledriver from Eddie Nketiah from close range.

Seconds later, Nketiah found the net from another one-on-one.

A VAR review found the England under-21 international offside, but Saka was fouled by Alex Telles as he played the ball into Nketiah’s path.

Ronaldo hit back within two minutes as he swept home Nemanja Matic’s cross for his 100th Premier League goal.

Arsenal’s nerves began to show and United should have been at least level by the time Xhaka fired home the final blow.

Tavares needlessly handled a corner into the Arsenal box on the hour.

Ronaldo stood aside to let Fernandes take the penalty, but his compatriot rolled the ball onto the post.

“There is a whole load of problems, but we have to have pride when you go onto the pitch. Go home and take a look at yourself in the mirror. The last four games are about pride for us.”

Ronaldo had another instinctive finish ruled out for offside before he teed up Diogo Dalot’s shot which was turned onto the post by Aaron Ramsdale.

Arsenal had lost three consecutive games prior to a much-needed 4-2 win at Chelsea in midweek that revived their top-four ambitions.

The relief around the Emirates was palpable when Xhaka restored the two-goal cushion with a powerful shot that flew past De Gea from 25 yards.

“You can’t expect to win every match as that is only afforded to one or two teams in the league,” said Arteta.

“We have to earn our right to win games and need a bit of luck, and today we had it.” 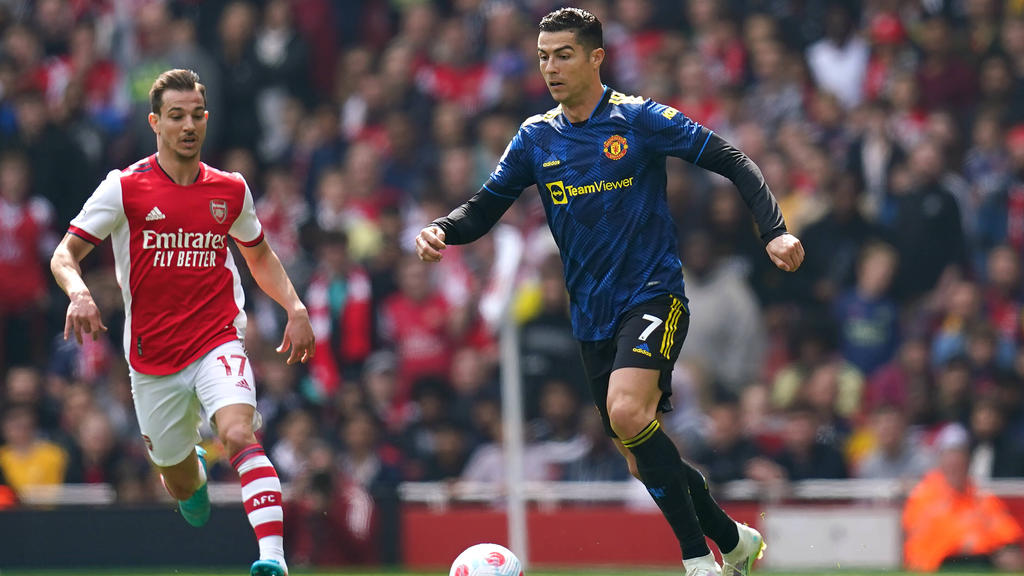